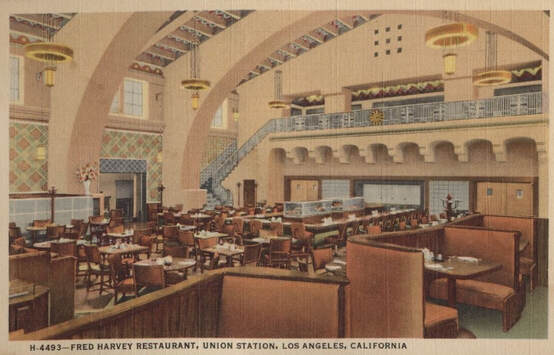 ​The information about this event will be available at https://laassubject.org/archives-bazaar

​15th-annual Los Angeles Archives Bazaar Program
This year will be a whole new adventure as the Archives Bazaar will be entirely virtual. Although the environment will be different, we still want to encapsulate the spirit of showcasing L.A. archives “All Day. All in one Place” through live presentations, interactive sessions, and on demand videos.  Links to access the event will be posted at laassubject.org/archives-bazaar.

Thank you all for visiting our table and reaching out to us!

​As Metrolink's said goodbye to its oldest locomotive #800, the LAUSHS has joined efforts to have the historic engine preserved at a local railroad museum."
You can contact Metrolink Board at SCRRA Board of Directors at P.O. Box 812060 Los Angeles, CA 90081-0018 or Board Secretary: Kari Holman at 213.452.0255 or  holmank@scrra.net.

For more information about the event, please visit ​https://laassubject.org/archives-bazaar

LA Metro's "LINK-US" Union Station annex plan, which has been likened to a "Martian Flying Saucer," has been ZAPPED by LA Union Station Historical Society's protests and approximately 450 negative letters submitted by Metro partons and citizens! The revised LINK-US plan, as now approved by Metro's Board, has a much more conservative and lower profile, with additional toilets and a flat pedestrian tunnel connecting the station's historic headhouse with the Patsaouras Bus Plaza. The tunnel itself will be widen overall and include a reserved lane for baggage and disabled passenger trams. "The plan, as revised, apparently will have little impact on the station's historic Hispanic architecture, although LAUSHS will keep a sharp eye on the details as the project progresses." Stated: Executive Director Tom Savio.
Stay tuned for further updates!

For additional details on LinkUS, see coverage at The Source and Urbanize – and the Metro project webpage, which includes the draft environmental studies.

Traxx Restaurant and Bar, in LA Union Station, closed for good on May 1, 2019 after 25 years of outstanding cookery. According to reliable sources, Traxx was seriously impacted by the opening of the Imperial Western gastro-pub that now occupies the Former Harvey House Restaurant in the south wing of Union Station, as well as the ending of its lease with Metro in September 2019. Fortunately, Traxx has donated its last menu (pictured) and other memorabilia to LA Union Station Historical Society. This happened just 3 days before Union Station celebrated its 80th birthday.
​ 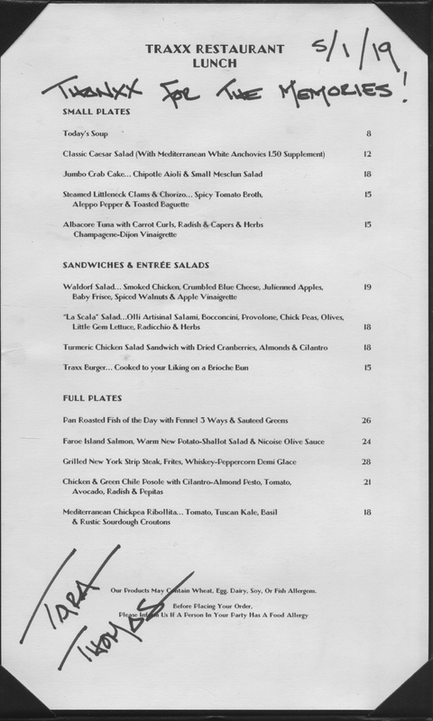 The Harvey House building next to Union Station reopened to the public the first week of October for the first time since 1967, when the Harvey House restaurant chain (that used to be a mainstay of regional rail stations) closed its doors.
​
​The space reopened as the home of Imperial Western Beer Company, a restaurant and bar big enough for more than 400 people, with its own brewery attached.